Ready to Play in a Bonspiel?

In curling, tournaments are called bonspiels, although a more accurate name would generally be “3 day party with some curling.”  To really get the full curling experience, you need to play in a bonspiel.

Bonspiels are a ton of fun and your skills will significantly improve simply by playing in one.  You also get exposure to the wider curling community by playing at other facilities against curlers from Orlando to Ontario.

Other tournaments will be posted as registration opens.

Sold Out?  Fill Out This Form:

Fill out the form and we’ll try to get you on a team.  Atlanta usually has multiple teams going and usually one or two are looking for additional players.  Or, if we get 4 or more requests we may be able to register another team.

Ouch! There was a server error.
Retry »

Drop us a line and we’ll see what we can do.

So How Do Bonspiels Work?

Broomstacking: After each game, the teams put their equipment away and meet up at the broomstacking table reserved for their sheet.  The winning team members offer to buy the first round of beverages for their counterparts on the other team.  (Winning Skip buys the losing Skip a drink, winning Lead buys the losing Lead a drink, etc.)  Frequently the losing team returns the favor for the second round.

Pin Exchange:  In the US, collecting and exchanging club pins is extremely popular.  At the broomstacking table, players exchange pins with their counterparts from the other team.  People display their pins in all different ways — attached to a jacket or hat, pinned to their duffle bags, arranged by tournament and framed in a shadow box, etc.

This tradition is falling out of favor in some parts of Canada.  It’s always good to offer your club’s pin even if you don’t get one in return — either because you already have that club’s pin, or because the opposing team didn’t bring any pins to exchange.

When you sign up for a bonspiel, remember to buy a few pins to take with you (at least 3).  If it’s the off season, email us and we’ll get them to you before you leave: [email protected]

Most bonspiels feature a raffle to raise money for the club.  People donate gift baskets which typically get raffled off Saturday night.  It’s always a nice gesture for your club or team to donate a basket.  Booze or a basket of items matching the theme of the bonspiel is fairly typical.

If there’s a warm room overlooking the ice, at some point someone will usually get a game of Left, Right Center, or Shut the Box going.  Both are a fun way to part with $3.00.

Crokinole is hugely popular in the curling community.  If you see a 24” round wooden game board with a circle of pegs in the center, ask someone to show you how to play.  Crokinole is fun and addicting – just like curling!

Most bonspiels follow a bracket format for determining which teams play against each other.  Games are typically played Thursday – Saturday, with the bracket finals on Sunday morning.  Those playing in the finals are led onto the ice by a bagpipe player and take a (small) shot of Drambuie.  Making it to the finals usually means you get a special pin or medal to take home (aka hardware).

Have any questions?  Bonspiel sold out?  Want to go to one not listed above?

Drop us a line at [email protected] and we’ll do our best to answer questions and get you on a team.

Learn the best game on ice

Play in a league

Events are posted in the warmroom on Slack.  Email [email protected] for the link. 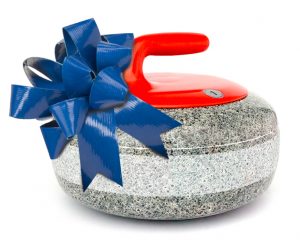 We currently follow the Atlanta IceForum’s policy for entrance into the facility. Masks are encouraged for non-vaccinated persons to enter the facility and while on the ice. Additionally, we ask that if you test positive for COVID-19 within 3 weeks of attending an Atlanta Curling Club Event to contact us as soon as possible, any personal/identifying information will be kept confidential.

Thank you for supporting the Atlanta Curling Club!

*If you test positive for COVID-19 within 3 weeks of attending an Atlanta Curling Club event, please contact us.